At a time when Disney was creating bright-colored cartoons that were more inspired by toy lines than anything else, they were also producing one of the most underrated cartoons ever made – Gargoyles. This series is rarely brought up in conversations about the best cartoons of the ’90s, but it deserves to get some new viewers. In just three short seasons, it managed to tell a dense and rewarding story unlike anything attempted by children’s television up until that point.

If you were one of the few viewers who watched Gargoyles, then you witnessed children’s entertainment at its finest. And even if you’ve been a fan since the ’90s, there are still some things you probably didn’t know about the beloved program. Luckily, series creator Greg Weisman has been open about his love for the series, and answers fan questions whenever he gets the chance. So even though the show was underappreciated at its time, there’s still a wealth of interesting information out there. If you’ve never seen Gargoyles,hopefully these behind-the-scene facts and interesting pieces of information will inspire you to seek out the series

The Show Dealt With Intense Racism 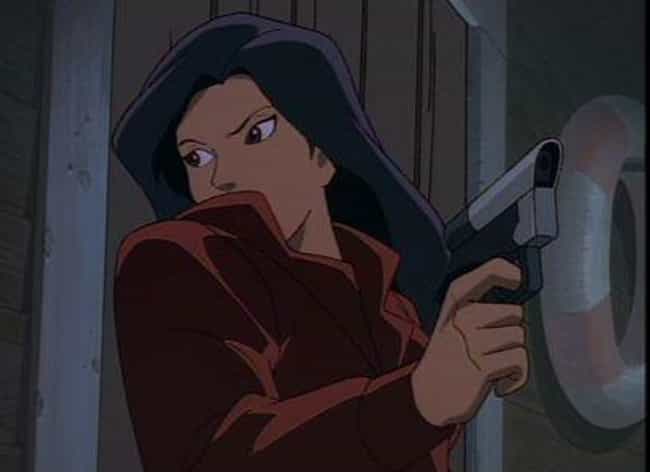 It’s important to remember that when Gargoyles was on the air (’94-’97) cartoons didn’t delve into major issues like racism unless they were doing some kind of very special episode. That’s not how Gargoyles rolled. From the first episode, the series was introducing multi-racial protagonists and antagonists with motivations not based on race.

As the series progressed, a group called “The Quarrymen” were introduced who were an offshoot of the Illuminati that wore black hoods, which gave them an overt resemblance to the KKK.

When series-creator Weisman was asked about how he decided to confront racial issues on Gargoyles, he explained:

Diversity was always important to me, but working on Gargoyles was where the problem of a lack of diversity in cartoons first sort of crystallized for me. Things we were doing casually, like making Elisa Maza a woman of color, were being hailed as revolutionary, which was both cool and disappointing at the same time. But it got me to focus on those issues.
‘Gargoyles’ Had A Star Trek Heavy Cast 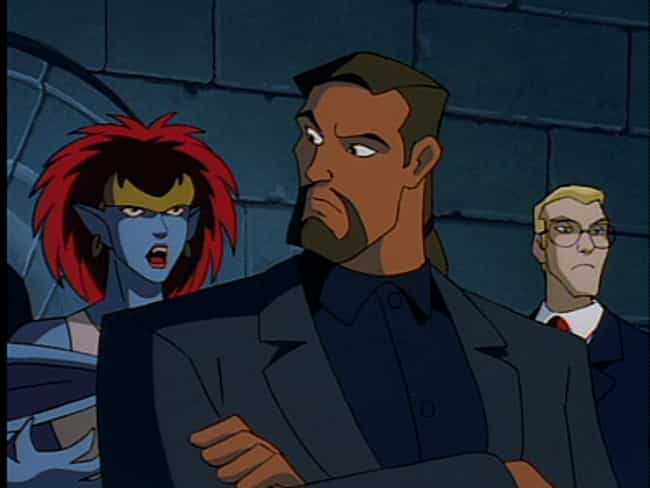 Gargoyles is impossible to talk about without mentioning its seriously nerdy voice cast. The show was stacked with voice actors from every series of Star Trek on the air up until that point. Actors like Johnathan Frakes, Brent Spiner, and Marina Sirtis were all over the show, and you couldn’t go an episode without hearing one of their Star Trek co-stars.

Shakespeare Was A Major Influence

Many children’s TV shows that reference Shakespeare will usually beat their audience over the noggin with edutainment, but Gargoyles wasn’t interested in that. This series was one of the only shows on the air at the time to weave in – not just references to Shakespeare – but to expand on what he had written by naturally including his amazing work in their story.

Early on in the four-part, Season 2 arc, “City of Stone,” Macbeth’s Weird Sisters, and even the Scottish king himself, are introduced the mythology of Goliath and his brothers. But Gargoyles didn’t just traffic in drama. The series would go on to incorporate Oberon, Titania, and Puck from A Midsummer Night’s Dream.

The Show Dealt With Controversial Issues Like Gun Violence 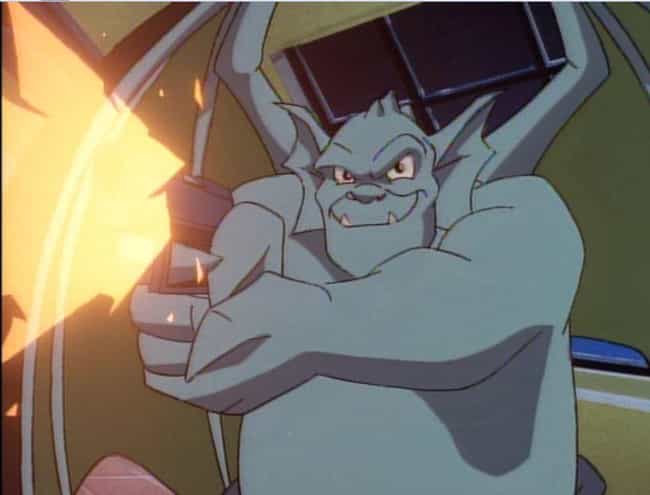 The eighth episode of the series, “Deadly Force,” was so far ahead of its time, with its frank discussion of the stark realities of gun violence, it had to be heavily censored. In the episode, Broadway (Bill Fagerbakke) watches a Western film and because he doesn’t know the difference between fantasy and reality, he shoots Elisa (Salli Richardson) with her own gun.

Elisa spends the rest of the episode in a coma, as the Gargoyles go on a mission to destroy all the guns in New York City, specifically those belonging to Anthony Dracon. The episode ends with Broadway apologizing for handling a weapon when he didn’t know what he was doing, and with Elisa saying she should have put her gun away properly.

When you look at the shows Gargoyles was slotted with on the Disney Channel (Dumb and Dumber, Quack Pack, 101 Dalmatians: The Series) one thing is apparent: they all share a lack of lead female characters. The audience’s entryway into the world of Goliath and his gargoyle brothers was Detective Elisa Maza (Salli Richardson), a quick thinking woman of mixed race who saw the inherent beauty of things.

On the other hand is Demona, a character who was initially viewed as an antagonist to Goliath’s clan, despite working with him in Scotland. Over the 1,000 years that Goliath and his clan were locked in stone, she experienced nothing but prejudice from humans. When you learn what she’s been through, it makes perfect sense she acts the way she does. This is just another way Gargoyles took the expectations of their viewers and turned them on their head.

Gargoyles is dark. Not just visually, but the story it tells rarely allows for a moment of levity. At its heart, the series is about a group of immortal monsters out of their own time who are oppressed because of the way they look. It’s not something you would call ” a normal children’s television show.”

The first episode of the series closes with a Viking who smashes a gargoyle to bits, while it’s in stone form, before setting him on fire. As night sets over ancient Scotland, the busted up gargoyle comes back to life and dies a second death in front of his friend. And that’s before two guys fall off a cliff while trying to murder a woman.

The Characters Had Oblique Motivations At Best

While most characters in children’s cartoons were pretty black-and-white, with specific motivations, the characters on Gargoyles had a collection of differing motivations. This made them seem closer to real people than the one-note characters audiences were used to seeing.

For the most part, the gargoyles just wanted to protect New York City and make sure their friends were safe, but everyone around them was playing their own personal game. For instance, David Xanatos, the wealthy industrialist who wakes up the gargoyles, does so by pretending to be their friend, but in reality, he was using them for a variety of reasons (initially theft, and later immortality). As bad as he is, Xanatos at least tried to stay positive, and even found love. He was truly a fascinating character.

Demona, the female gargoyle who grows to hate humanity over 1,000 years, begins the series as a fierce fighter who wants nothing but revenge for the way she’s been treated. But after the intervention with Puck, she learns what it’s like to be human, after he gives her the ability to turn into one during the day.

‘Gargoyles’ Was Meant To Be A Comedy

It’s fair to say that Gargoyles was a fairly dark show. While there were moments of levity provided by some of the side characters, it was mostly a serious, action-adventure show. Weisman explained in an interview that the initial pitch was to make a “really fun comedy with a lot of adventure, fun stuff, a rich story, and all that.”

The series wouldn’t have featured the hulking characters that fans loved; instead, it would have featured “short little cute gargoyles.” However, once Weisman got a note about restructuring the show, he and the rest of the creators ran with the idea of the deeply serious Goliath, and came out with the show that made it to air.

Even now, most animated-television shows don’t tell an episodic story in the same way that Gargoyles did in the mid ’90s. The first story arc was a five-episode narrative that jumped back and forth in time, while showing where the gargoyles came from, as they adjusted to their new homes in New York City. It’s an engrossing opening chapter of the series that swung for the fences in every way.

The long-form storytelling on display in Gargoyles wouldn’t become the norm for television for a few years, and even then, it wouldn’t become lauded as a brilliant idea until shows like The Sopranos appeared on HBO.

The Show Had Some Unusual Inspiration

Gargoyles wears many of its inspirations on its sleeve; specifically Shakespeare, Arthurian legend, and Scottish mythology. But the one source of inspiration that’s not as obvious is Disney’s Adventures of the Gummi Bears. How could this very, children’s-friendly series inspire such a gloomy program? It turns out that that the show owes more to the kiddie creation than you think. Weisman explained:

One of our main inspirations was Disney’s Adventures of the Gummi Bears, which was a show that was created by Jymn Magon, who also co-created TaleSpin among other terrific series. It had a wonderful, rich backstory and mythology. It was set in a medieval time period, and I honestly felt that it didn’t get enough respect.

Weisman Is Still Connected To The Show’s Fandom

Normally after a series ends – especially a series that only ran for 78 episodes (13 of which are very disappointing) – the production staff goes their separate ways. But not series-creator Weisman. While he’s gone on to produce shows like Young Justice, and write for The Flash, he’s also stayed connected to the Gargoyles fandom.

Weisman keeps up a website where he blogs about Gargoyles, and you can ask him questions about the series. He’ll even answer if he has time. Although by now he’s answered most of the important questions that have come up

It makes sense a show about flying monsters coming alive at night would be visually very dark, but you have to remember the shows that were on the air at the same time, by contrast, were very colorful and bright. Gargoyles used stark contrast and shadows to help tell its story, something that was only being done by WB’s Batman: The Animated Series.

Even though Gargoyles would only go on to live for three seasons, (only two of which are considered canon) its color pallet would on to inspire darker shows in the 2000s (Courage the Cowardly Dog, Samurai Jack).

After the incredibly forward-thinking and narratively dense second season, Disney moved Gargoyles out of syndication and aired it Saturday mornings on ABC. The producers put in a new group of writers, who essentially retooled the show to ignore the previous seasons. After the show went off the air, Weisman began writing a comic book he said picked up where the second season left off. He told Comic Book:

Gargoyles is and always will be my baby, and from a television standpoint, my first love. I’m still to this day yearning to do more Gargoyles comic books in the future. We did 18 issues with SLG publishing that I’m very proud of, and turned out really great – we [the creators] think of that as the real, canonical third season of the show. I would love to do more comics, I’d love to do more episodes, I’d love to do anything with Gargoyles, quite frankly.

Stay Single Until You Find The Right Person Who will Put Effort Into Loving...

Woman Leaves Her Back Door Open As A Storm Approaches, Only To Find That...

Black men are succeeding in America

Sign Language Alphabet | Koko The Gorilla Who Mastered It

Spanked As a Child Memories